Shri Bhaktivedanta Swami gives the following information about Shri Lokanatha Goswami:
“Shri Lokanatha Goswami was a personal associate of Shri Chaitanya Mahaprabhu and a great devotee of the Lord.
He was a resident of a village named Talakhadi in the district of Yashohara in Bengal.
Previously he lived in Kachnapara.
His father’s name was Padmanabha, and his only younger brother was Pragalbha.
Following the orders of Shri Chaitanya mahaprabhu, shri Lokanatha went to Vrindavana to live.
He established a temple named Gokulananda.
Shrila Narottama Das Thakura selected Lokanatha das Goswami to be his spirtual master, and he was his only disciple.
Because Lokanatha dasa Goswami did not want his name mentioned in Chaitanya Charitamrita, we do not often see it in that celebrated book.
On the E.B.R. Railroad, the Yashohara station is located in Bangladesh.
From the railway station one has to go by bus to the village of Sonakhali and from there to Khejura.
From there one has to walk, or, during the rainy season, go by boat to the village of Talakhadi.
In this village there are still descendants of Lokanatha Goswami [i.e., descendants of his brother, see below.].”

A pranam mantra for Lokanatha Goswami has been written by Narottama Dasa Thakura.
It reads :
srimad-radha-vinodaikaseva-sampat-samanvitam
padmanabhatmajam shrimallokanatha prabhum bhaje
“I worship the lotus feet of Shrila Lokanatha Prabhu, the son of Shri Padmanabha. He is a storehouse of single minded service to the lotus feet of Shri Shri Radha Vinoda.”

In the village of Talakhori Gram in the Yashohara district, lived the mother and father of Shri Lokanatha Goswami.
His father’s name was Padmanabha and his mother’s name was Shri Sitadevi.
Shri Padmanabha Bhattacharya was a very dear follower of Shri Advaita Acharya.

One day, Shri Lokanatha Goswami took his birth in the house of Shri Padmanabha and Shri Sita Devi.
His younger brother’s name was Shri Pragalabha Bhattacharya.
The descendents of Pragalabha still live in Talakhori Gram.

In this connection, Shrila Narahari Chakravarti has written in his Bhakti- Ratnakara :
“While he was weeping and weeping, crying out his heart at the lotus feet of Shri Chaitanya, Lokanatha felt himself being caught up and embraced by Shri Chaitanya Mahaprabhu.
Later, as Lokanatha bid him farewell, the Lord gave him a confidential message which consoled him greatly.
After this, he offered his soul at the lotus feet of Shriman Mahaprabhu, and after giving his pranamas to the all the devotees, he went on his way.”

After this, Lokanatha never returned to home life.
Rather, afflicted with deep separation from Shri Chaitanya Mahaprabhu, he began wandering from one holy place of pilgrimage to the next.
Gradually, after visiting many holy places, he came to Vrindavana Dham.

Shri Chaitanya Mahaprabhu, after visiting many holy places of pilgrimage in South India and again returning to Jagannatha Puri for some time, finally came to Vrindavana.
Hearing of this, Lokanatha Goswami quickly went to Vrindavan.
Meanwhile, Chaitanya Mahaprabhu had already left for Prayaga-dham.
Arriving in Vrindavana and not seeing Mahaprabhu, Lokanatha was heartbroken.
He resolved to set everything right by starting out the very next morning for Prayaga, to meet the Lord.
That night the Lord came to him in a dream and consoled him, saying, “O Lokanatha, stay in Vrindvana.
I have not broken my vow. I have already come to Vrindavana and live there in another form.
In this way you shall always maintain my connection.”

A few days later, Shrila Lokanatha Goswami chanced to meet the most dear followers of Shri Chaitanya Mahaprabhu :
Shri Rupa, Shri Sanatana, Shri Gopala Bhatta, Shri Bhugarbha and others.
The exchange of divine love between them was wonderful to behold!
They were all of one mind, one heart.
In the midst of the Goswamis, Shri Lokanatha was the oldest.
He was fully absorbed in prema.

In his mangalaracana to the Hari-bhakti-vilasa, Shri Sanatana Goswami offers his respects to Lokanatha Goswami as follows :
vrindavan priyan vande shri govinda padashritan
shrimad-kashishvaram lokanatam shri krishnadasakam
“I offer my obeisances unto Shri Kashishvara Pandit, Shri Lokanatha Goswami and Shri Krishnadas Kaviraja Goswami who are very dear to Shri Govinda in Vrindavan, having taken shelter at his lotus feet.”

Shri Lokanatha Goswami wandered throughout all twelve forests of Vrindavan in great ecstasy.
In one of the forests there is a village named Umarao.
There he stayed for some time on the banks of Kishori-kunda.
He had a great desire to establish the worship of the deity and render service to Krishna in that way.
Understanding Lokanath’s aspiration to serve, Krishna Himself appeared before him and offered Lokanatha a vigraha, saying, “Worship this Deity here.
This deity’s name is Radha-vinoda. After giving him this beautiful deity, the Lord suddenly disappeared.
At this, Lokanatha Goswami became stricken with anxiety.
Seeing him absorbed in worry, Radhavinoda smiled and said, “Why have you brought me here?
I have come here personally just to satisfy your purpose.
What do you want from me? I live in the forest here, near the village of Umarao.
By this Kishori kunda you see before you, I make my residence. You must now give me something to eat. Quickly.”

Lokanatha Goswami’s joy knew no bounds.
He floated in the waves of prema.
After this he prepared an offering for the Lord to eat.
After offering fine rice on a fresh banana leaf to the deity he experienced great ecstasy by offering his life at the lotus feet of the Lord.
He was stunned by drinking in the nectarine beauty of the Lord.
After this he offered a bed of flowers and made the Lord rest.
Shri Lokanatha Goswami made this place his home.

The local villagers and cowherd men wanted to construct a bhajan kutir for him, but he refused to accept it.
In order to protect the deity, he prepared a cloth bag which he would keep around his neck at all times.
Shri Radhavinoda became like a jeweled necklace around the neck of Lokanatha Goswami.
The cloth bag was his temple.
This was Lokanatha Goswami’s practice until the day he disappeared from this earth, and is an example of the strict vairagya he maintained.
With great care he always stayed in the association of the Goswamis of Vrindavana.

Shrila Lokanatha Goswami gave mantra diksha to Shri Narottama Dasa Thakura.
There is no mention in the shastras that he accepted any other disciples.
Narottam Thakura served him in secret by going in the dead of night to the place where Lokanatha would pass stool and urine and cleansing the area very carefully.
Seeing Narottama’s humility, Lokanatha accepted him.

On the day of Krishnastami in the month of Shravana, he entered into the eternal pastimes of the Lord.
Shrila Narottama Dasa Thakura Mahashaya prays as follows at the lotus feet of his gurudeva :

“O Lokanatha, O gurudeva! If you are pleased with me, please keep me in the shelter of your lotus feet, and cast your merciful glance upon me.
By your mercy I can find the perfection of inner fulfillment.
And by your mercy I can someday meet Shri Chaitanya and Radha-Krishna.
If you are not merciful to me, then what shall I do?
Please, just once, fulfill my heart’s desire.
In the three worlds of birth and death no one is more in need of your mercy.
Please give me your mercy and give me a place at your lotus feet.
Day and night I sing the qualities and pastimes of Radha and Krishna.
Still, the inner aspirations of Narottama for the service of Shri Shri Radha-Govinda and Chaitanya Mahaprabhu can only be realized through your grace, O Lokanatha Goswami Prabhu. ”
< To see photo Album 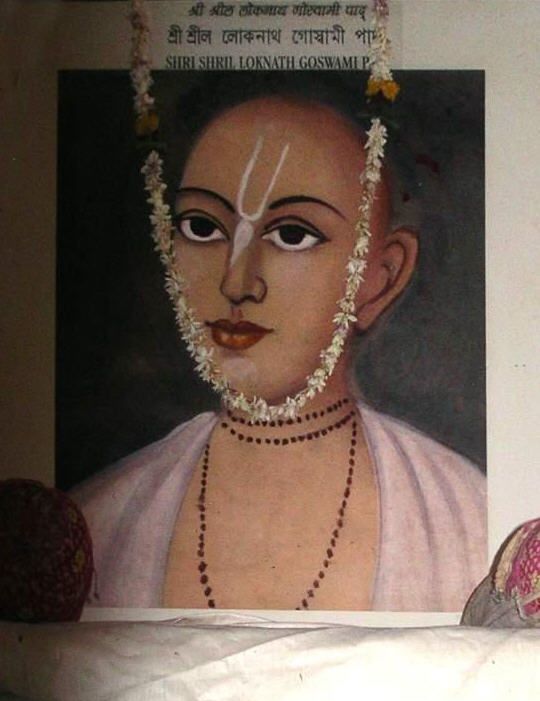